From Bohemia Interactive Community
Jump to navigation Jump to search

Positions in Arma games are always represented as arrays. There are two types of positions:

On the map and on the terrain, the X-axis runs from west to east and the Y-axis runs from south to north. The origin [0, 0] is (usually) located in the bottom left corner.
While the Z-coordinate is always the height/altitude, the point relative to which that height is measured depends on the specific position format (see Types below). 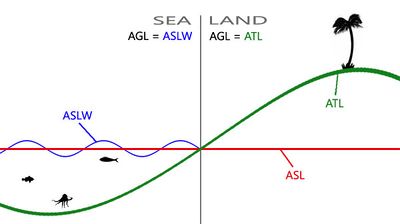 A comparison of most common formats, where each curve shows the reference height (Z = 0) for that format. Notice that the ASL format is absolute, i.e. its reference height doesn't change from one place to another, unlike other formats. For example, an object on a mountain and an object at the bottom of the sea both have an ATL height equal to 0.

There are a number of formats available in Real Virtuality:

⚠
Note that the only absolute position format in Arma for 3D calculations is the ASL format. Always pay attention to this fact when performing 3D calculations. For example, when a unit is climbing a mountain, the Z in ATL format is always 0. The following example demonstrates this behavior:


Let's say it is desired to see if there is an intersection between two horizontal positions:

This array only has two elements and is usually used with 2D information, for example standard markers or UI commands. If used with e.g distance, Z is assumed to be 0.

Z is measured from the sea level which is constant across the map.

Z is measured from the surface of water at that position. Both waves and pond objects affect the result.

Z is measured from the terrain level which varies across the map.

Obtaining Z for a unit standing on a rock

Over sea it gets even more complicated as instead of PositionATL, PositionASLW is used minus the offset for the surface height, presumably over waves too, as Z seems static. As there is currently no way to obtain Hsurface, it becomes impossible to convert given PositionAGLS into other formats, unlike with other position formats.

The function below will place passed object onto walkable surface, if there is one, otherwise on the ground. If only X and Y of the position are supplied, the object will be placed on surface, if Z is supplied, it will be treated as offset from the surface level.

Alternatively, setVehiclePosition can be used. It will put the object onto the nearest surface.

Similar to PositionASL, however Z is measured from the sea level to the the model centre [0, 0, 0] of the object, rather than transformed boundingCenter or land contact vertices.

Relative position is normally an [X, Y, Z] offset from the model centre.

The format used in configs, such as mission.sqm, is [X, Z, Y], where Z and Y are swapped around. One other command that uses this format is positionCameraToWorld. Z in configs is measured from the sea level.